Pilates, in Brief (get it? he liked to wear briefs)

Before we embark on the Pilates in Holland world of toys, here’s a brief Pilates quiz. (Don’t worry, there are NO wrong answers!)

Pilates is named after its founder, Joseph Pilates. He was:

Pilates emigrated to England in 1912 where he:

Joseph was sent to an internment camp on the Isle of Man during WWI. This is where he:

Pilates moved to New York in 1923 and opened his first studio. Contrology was: 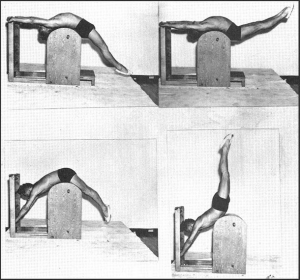 Raise your hand if you scored 100%…great job! Oh look, Joe is celebrating you!

Joseph Pilates on the Spine Corrector

In the next few weeks, we’ll break down the Wunda chair, reformer, ladder barrel, Cadillac, and Bodhi system regularly used in the PIH studio.

Welcome to Our World of Toys

Welcome to Our World of Toys