Sometimes one act of kindness is all it takes to change a life.

I have been lucky enough to have been the recipient of countless such acts, but some of the biggest have come from one man and his family. Mr. Karl Von Ins was my seventh-grade English teacher and middle school basketball coach. We formed a bond that I felt was special, that he was MY advocate. Turns out many students felt that way, which doesn’t lessen what I felt and feel for Mr. Von Ins, but is a tribute to the man he is and the many lives he has touched. 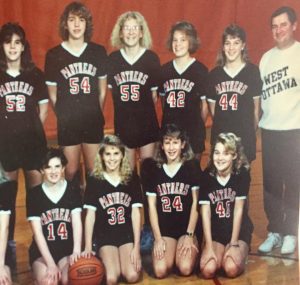 Mr. Von Ins kept an eye out for me. I was in West 2 White (who grew up in West Ottawa and understands that middle school reference?!?) and at one point was almost moved to the rough and tumble yellow group. (Love to all the color groups!)  Mr. Von Ins went to the office and went to bat and was like, “you are not switching her.” He just instinctively knew that a different friend group was going to be a real slippery slope for me. He knew that. I think back to that one single thing he did for me and I absolutely know it changed the trajectory of the rest of my education.

When I moved to the high school, I still stopped by the middle school to visit Mr. Von Ins. At the start of my sophomore year, I was in a very bad place, having problems with my stepdad, dealing with trauma (I now know), and just generally treading water at all times. Though I didn’t use the words, it was clear to Mr. Von Ins that I was a danger to myself and needed an intervention. I remember waiting in the office. He went somewhere else and came back and said, “I called your mom. You’re going to get some counseling and have some space. I also called my wife and you’re gonna live with us.”

Mr. & Mrs. Von Ins have two kids, Chris and Amy, and the entire family welcomed me in. Chris, a huge Madonna fan, was away at college, so I got to live in his room with Madonna posters, souvenirs, and paraphernalia covering every square inch of every wall. Because I didn’t bring a car with me, Mr. Von Ins drove me to work, school, and everywhere else. Occasionally, he would let me borrow his beloved red hatchback CRV, which apparently his children weren’t even allowed to drive. He would tell me, “but you can borrow it.” He always made me feel so special. I stayed there for nearly a year and I’ll forever be grateful.

During that year, I went to therapy, but that isn’t really what helped me. Mr. Von Ins had planted a seed: that I was valuable and special and deserving of my own self-respect, even though I don’t think Mr. & Mrs. Von Ins really understood the magnitude of what was happening inside of me. Of course, I was too young to realize all that at 16/17 years old. But the seed was planted and led me to graduate high school, move to California for 10 years, and later seek out therapy that would get to the root cause and help me deal with my past trauma.

Strangely, I don’t remember leaving. But what sticks with me is that it felt like a lifeline. I really don’t know what would have happened to me without their consistency and support. It was the beginning of a journey where I learned to advocate for myself. 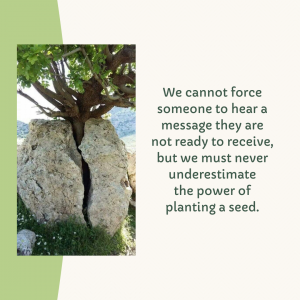 Mr. Von Ins and I went on to stay super close and I was recently able to tell him what an impact he made. You assume somebody knows that when they’ve opened their home and let you live there for a year of your life, they know how important it was to you, but he didn’t and I’m so glad I had the opportunity to tell him.

There are so many who sow these positive seeds all around us. I want to remind us all and maybe ask you to take a moment and thank someone in your life. We hope that PIlates in Holland is also a place that, if not planting seeds, creates a fertile place for them to grow.